Sun vs wind: Mahindra e2o takes on a sail boat 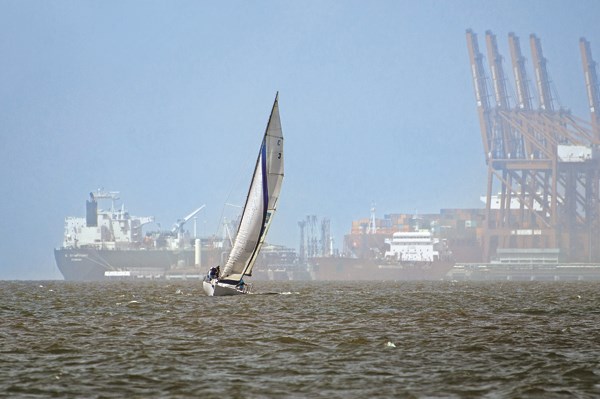 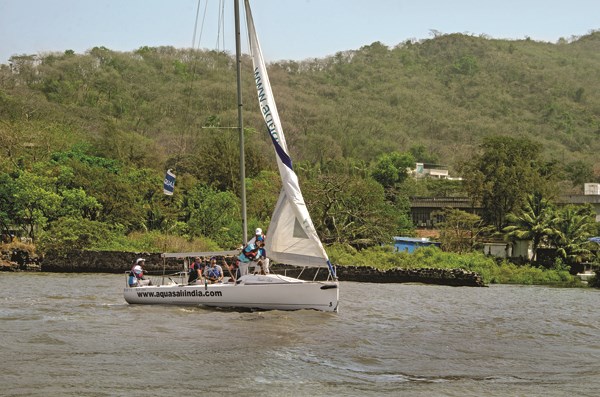 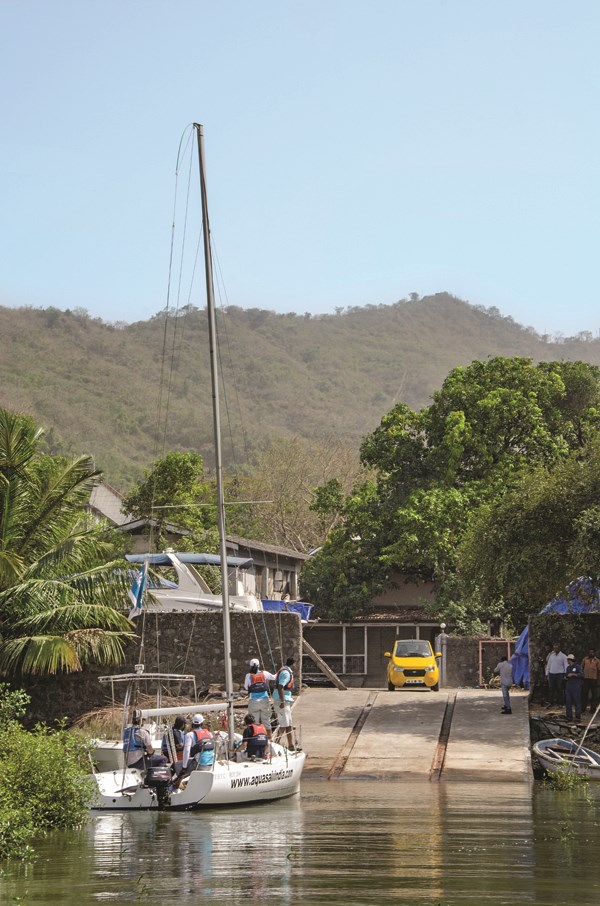 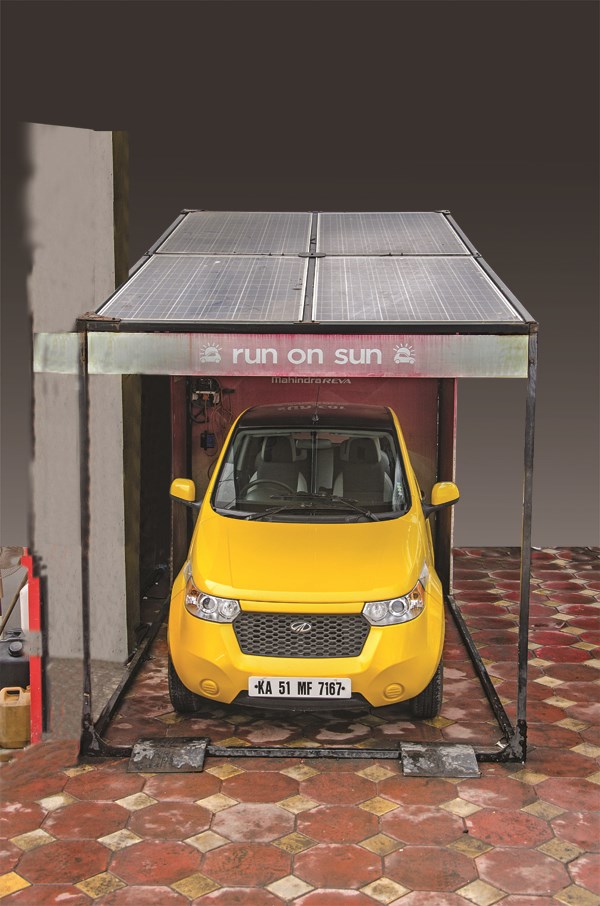 To celebrate World Environment Day, we race the battery-powered Mahindra e2o against a sail boat from Mumbai to Uran. It's a clean fight.

I’m on the southern-most tip of Mumbai, in Colaba. It’s a toasting-hot summer’s day and the heat coming up through my shoes is so strong, it’s frying my toes. Beads of perspiration soon break out and the heat and humidity are so oppressive, I start fanning myself; what I’d give for a cool, air-conditioned room! Then a breeze picks up. Flags in the distance flutter and palm leaves begin to rustle – not good. The odds are already steeply stacked against our electric car, and now the wind’s picking up.

It doesn’t look good at all. To begin, there’s the sheer length of the D-shaped route we’ve chalked out around Mumbai’s harbour. We’ve got to drive all the way around the bay, 67km in all. But the boat only has to cut straight across, and it’s less than 13km from bank to bank. Then, because we’re starting at midday, there’s the crush of downtown traffic to deal with. There’s the range anxiety, always a huge issue on an electric, and to make matters worse, the e2o only has a top speed of 80kph – positively glacial when you really want to get going.

The Beneteau has problems of its own. Of course, no range anxiety here, but the wind is still unpredictable. And then, getting up onto the slipway on the other side of the bay isn’t going to be easy either. There’s got to be enough water for the boat to enter, and with all the vegetation on the approach, there’s likely to be plenty of tacking too. What will help, at least mentally, is the fact that the boat can’t top 12-15kph in these conditions. And that makes even the e2o feel quick.

Then, one of India’s most famous sailors, Shakeel Kudrolli, strolls onto the jetty, his confident smile telling me his ‘state of charge’. “The wind’s up,” says the world silver medalist, “We’ll be pretty quick today.” He’s got the right boat for the job too. The 7.5-metre French Beneteau is part day-sailer, part race boat, and it can go at a fair clip with the wind behind it. Its tall, 40-foot mast allows it to run plenty of ‘canvas’ for the amount of drag it exerts and the lead weight in the keel helps the boat really lean into the wind without going belly up too.

Now understandably, at this juncture, many of you must be asking yourselves, “What’s so green about a race in the first place?” True, going flat-out normally isn’t green at all. But just look at the competitors – they’re anything but your typical gas guzzlers. In the green corner, powered by the wind, is the Beneteau sail boat; no problems with going flat-out here. Also in the green corner, Mahindra’s e2o, charged using only squeaky-clean solar energy. Yes, it took us a day-and-a-half to charge to 100 percent on solar power alone, but Mahindra says there are faster and better solar chargers on the way that will need only 5-6 hours for a full charge. Imagine that – you drive to work, plug into your solar charger and your commute is free!

Anyway, we’re here to race and our start time of 1pm in the afternoon is almost upon us. So we belt up, switch on the e2o and wait. After being in the sun for half an hour, I’m dripping like I’ve run a mile and I switch on the aircon. It reduces our range a bit, but it’s just too hot here! At 12:59:50, I put the e2o in F (or forward), and get ready to wave goodbye to the boat. “See you on the other side,” says Shakeel, pre-empting me as he hops on the Beneteau.

A few metres up the ramp, I glance back at the Beneteau, expecting it to be only a few feet away, but the wind is already in the sails and the boat’s done its best impression of a handbrake turn. It’s pirouetted 180 degrees and is now 20 metres out. “Let’s go!” I yell to my navigator, Rahul.

Now the tip of Colaba feels nothing like modern Mumbai. More a sleepy fishing village on the outskirts of Mumbai than the tip of a modern metro, the roads are initially devoid of traffic. I attack them like they are a rally stage, the e2o in B (boost mode). The Reva doesn’t have much grip to begin with, so carrying speed through some of the corners needs a bit of corrective action. What a pity that this steering is so vague, the regenerative brakes are soggy and the e2o rolls like a double-decker.

Before we know it, we are out of the cantonment and into one of India’s densest commercial districts. The traffic, in fact, is so packed; we get stopped at the same signal, twice. And then, because Mumbai’s roads are always in a state of repair, we have to take a detour. We’re sunk

Out on the bay, master and commander Shakeel is motoring along pretty nicely. Wind power is clearly superior to solar-charged horsepower, if the latter is stuck in traffic, and the Beneteau is moving along at a good rate of 4 knots (7.4kph). Then, just as the e2o gets mired in even more traffic, the wind gets stronger. What was a 5-knot wind has picked up to around 10 or 12 knots, and because it is blowing in pretty much the right direction, the boat is making hay while the wind blows.

Sailing with the wind almost on your back is called sailing on a broad reach. So if the wind is coming in from 6 o’clock on a watch dial, sailing on a broad reach would be running in the direction of either 11 or 1 o’clock; basically, off at a slight angle. Whereas the wind blows the boat in a particular direction, the rudder at the rear is used to correct course. What helps the sail boat ‘catch’ the wind, of course, is the fact that both the sails can be turned through almost 180 degrees to do so. And with sails of this size, the force exerted is quite something.

The Beneteau now passes in between the fortifications on Oyster rock and the sunk rock lighthouse (google them!) and steers an even more direct course towards the Mora Jetty, the point at which we’ll meet across the bay. Thirty minutes in, we give Shakeel a call. We’re still stuck in a jam between Ballard Estate and the Mumbai Eastern Freeway, and I’m hoping the wind has come off and slowed the boat down. Quite the opposite.

“We’ve done one-and-a-half nautical miles (2.8km) already,” says a pretty chuffed Shakeel, “But where are you?” Of course I would’ve loved to start first thing in the morning and avoid traffic, but the wind is really unpredictable at that time of the day. Anyway, nothing for it now but to press on.

Then things get even better for the boat. It’s now running at a steady 4.5 knots (8.3kph), and that’s because the wind has picked up even more, to a stiff 16 knots. Both, the main sail at the rear and the more compact jib in the front, are nicely filled and the boat is already approaching the halfway point, deft inputs being made on the rudder occasionally to correct course.

A few minutes later, we’re finally onto the Freeway that runs up the spine of Mumbai, and I roll the windows open, switch the aircon off and put my foot down. But overtaking on this open, elevated road isn’t easy. Cars casually cruise by at 80kph, and there’s nothing I can do – that’s the top speed of the e2o! I even try my best impression of Yosemite Sam and go, “YAAAH MUOOOL”, but it doesn’t seem to help.

So, even though I’m using Boost mode by flicking the gear lever back and forth between Forward (F) and Boost (B), and I’m running right up against the top speed of the car, we’re barely keeping up with the traffic. What does help is that we get lucky with the signals. Fifty minutes in, as we approach the Vashi creek, a quick mental calculation tells me we’ve been holding on to a really good average speed for the last half hour or so; we just might have caught up a bit. We’ve made good time, but the boat’s still ahead. At 50 minutes, it’s already past the halfway point.

But, there are loads of traffic-free roads ahead and we can still make it – we’ll soon cross over from the island to the mainland. Although there are plenty of annoying speed breakers, this allows the e2o to overtake; its initial acceleration is really good.

We cross the last of the bridges at Belapur after an hour and seven minutes, and then, since the State Of Charge of our battery is pretty good at 56 percent, and we only have around 37km to go, I really start getting brutal with the throttle. We take no more than 15 minutes to traverse the highway section to the next toll in Uran. We expect traffic on the way into this busy industrial zone but luck is on our side again – the streets are free of gridlock. I find myself actually cornering the Reva and carrying as much speed as I can.

Now we know we are close but I’ve no idea where the boat is. “We are around 5km from the jetty. Where are you?” I call and ask Shakeel. “What?” comes the quick retort, “Have you been flying? We’re nearly there too, but how did you make up so much time?” Quietly confident they were well ahead, the sailors haven’t been pushing nearly as hard as we have. And because the last section needed them to zigzag a bit, they’ve lost a few minutes.

Our luck holds in the final stages as well. We slip through the smaller lanes faster than we expect, the narrow width of the e2o helping us slip past handcarts, bikers and parked cars easily. Finally, we turn into the complex where the slipway is. I don’t know what to expect, but we see the boat coming to a stop just as we round the corner, shooot!!

Shakeel is chuckling, “That was fun. You nearly had us in the end.” We really did make good time, and we were pretty quick once we got onto the Freeway. And yes, that was fun, even though Shakeel’s the one spraying the green tea. Next time, however, I’ll get a Tesla!