New Honda City diesel takes on Hyundai Verna, Volkswagen Vento and Skoda Rapid. The crown to the mid-size sedan segment is all up for grabs. 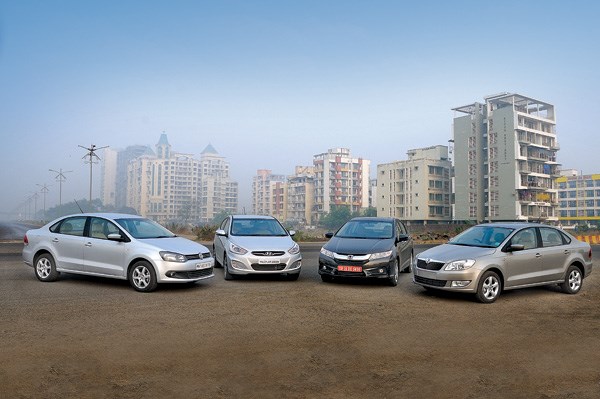 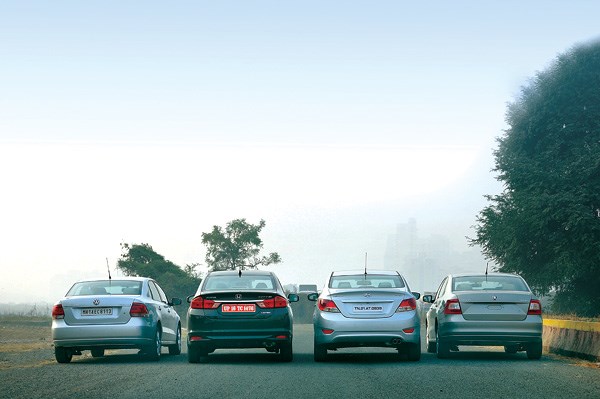 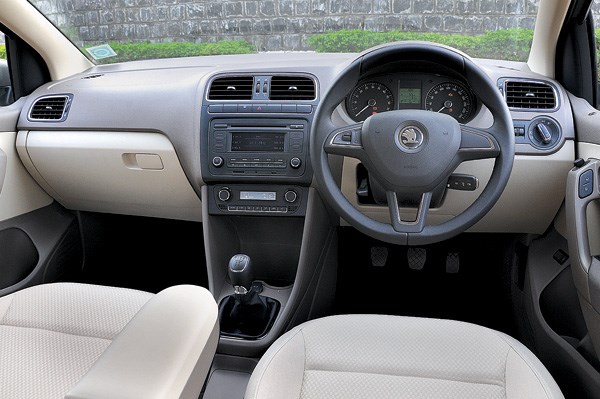 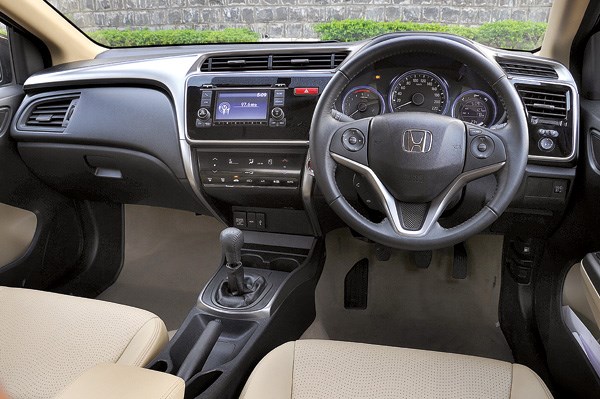 The 1.5-litre engine under the hood of this new City may in fact be an ordinary diesel, but in the case of Honda’s superstar, it may arguably be the most important engine to be offered in the car’s 16-year Indian innings. But is it good enough to take on carmakers that are well versed in the art of mid-size diesel saloons? We brought out three of the City’s most able competitors – the Skoda Rapid, the Volkswagen Vento and the Hyundai Verna -- to find out just that. All three have been at the receiving end of updates – some minor and some major – and all three are what the City will have to beat to take the mid-size diesel throne.

Honda has priced base versions of the City diesel well – ‘E’ versions start at Rs 8.62 lakh – but this top-end VX costs Rs 11.1 lakh. Compare that to the Hyundai Verna CRDi SX’s Rs 10.96 lakh, the Volkswagen Vento TDI Highline’s Rs 9.99 lakh and the Skoda Rapid TDI Elegance’s Rs 9.82 lakh, and you will see the City is the most expensive car here. Is it good enough to justify the extra spend?

The minute you lower yourself into the City’s seats, it will seem worth it. Honda spent a lot of time getting the foam density of the cushioning just right and it shows – these seats are the best we have experienced in a mid-size saloon. Even more than the seats though, it’s the dashboard that is a big step up from the City of old. It is, for starters, ergonomic and easy to use, and at the same time manages to look modern and appealing. There are a few gimmicky bits, but overall, the black dash with a silver ‘T’ running across it looks very rich, the dials are super legible and the touch-based climate control operation is slick in the way it works. This raises your expectations, but the hard plastic quality on the upper dashboard and around the glovebox is what drags the cabin ambience down a bit.

The Verna’s two-tone dash with wood and silver inlays looks a bit traditional when compared to the City’s, but it is still quite appealing. It isn’t as easy to use as the City’s dash, but the fit and finish and overall quality are impressive. Also, the front seats have superb bolstering and the Verna’s dash is quite low, unlike the City, making it easy to see out of.

Both the Rapid and Vento dashboards are straightforward and maybe a bit unexciting after the mixed colours and surfaces of the Honda and the Hyundai. If asked to choose between these two, we would go with the slightly more upmarket interiors of the Vento – the steering wheel is leather-wrapped (as opposed to the Rapid’s new three-spoke rubberised wheel), the gearlever has chrome on it and we preferred the darker, more sober colours of the VW’s interiors. Both feel the most solidly built of the quartet and we also like the fact that the Skoda and the VW offer the widest range of adjustment for the driver’s seat, and in fact are the only two to offer reach as well as rake adjustment for the steering wheel. At the rear, the City easily has the best seat – a combination of soft cushioning, comfortable backrest angle and loads of space make it so. The seats are at the right height and this makes it easy to get in and out as well. However, tall passengers will find their heads brushing the roof lining and the fixed headrests aren’t the safest either.

The Rapid and the Vento, not surprisingly, have identical rear seats, and that means identical comfort. The seats are set a little lower than the City’s but have great space, are comfortable and, importantly, have adjustable headrests. Also, like the City, they have big windows that let a lot of light in. It’s the Verna that’s the least impressive at the rear – the seat is low and lacks thigh support, and because of the Verna’s angular styling, the rear windows are quite small.

What the Verna has in abundance is equipment – there’s keyless entry and go, climate control, a rear-view camera and at least three ways to hook up your audio device. The 2014 car has received a mild facelift that includes LED daytime-running lamps, automatic projector lamps and pretty alloy wheels.
It is, however, topped by the City. Honda has gone to town matching the Verna for equipment and offering some more. The rear camera, for example, has the regular view, a wide-angle view and a top-down view for when you’re reversing up to, say, a high footpath. Then there’s a sunroof, touchscreen operation for the climate control system and rear air-con vents.

The Rapid and the Vento seem pared down in comparison – yes, they have rear air-con vents and yes, they have Bluetooth connectivity and climate control, but otherwise, there’s little else that stands out on the equipment list.

As for boot space, it’s the City with its 510 litres that is considerably bigger than the 460-odd litres of the other three.

The all-aluminium 1.5-litre i-DTEC motor in the City makes the least torque here. Its 20.39kgm is considerably less than the Verna’s 26.5kgm, but there’s a solid reason for this. Masters of practicality, Honda engineers have tuned the car for easy driveability and fuel efficiency over shove-in-the-back turbo surge and that’s exactly what the City serves up. The engine pulls cleanly from below 2,000rpm, power builds in a predictable manner, and the relationship between throttle pedal inputs and engine responses are the most immediate in the City. But after around 3,000rpm, a lot of the linearity is lost. As on the Amaze, the motor revs with very little real increase in performance. In contrast, the Verna falls off boost below 2,000rpm, so driving it in the city necessitates quite a lot of rowing through the gearbox.

If you’re looking for an exciting drive, it’s the Rapid or the Vento you need to go for. Both have immense midrange thrust that belies their modest 105bhp outputs and makes them feel much quicker than the 126bhp Verna. Both love to rev and will, without complaint, run to 5,000rpm – the City’s engine redlines at a mere 4,400rpm. And despite having almost identical engines, there are small differences between the Rapid and the Vento – the Skoda has marginally less lag but feels microscopically less punchy as well, which is possibly down to the slightly different ECU tuning adopted.

With just 99bhp, the City’s lack of outright punch shows in its 0-100kph time. At 14.75sec, it is considerably off the 10.5sec time set by the Verna and 11.3sec and 11.4sec times set by the Vento and Rapid respectively. But as the time sheets spell out, the City is the most responsive in the, er, city. Then again, the Rapid and the Vento, thanks to their strong midrange, set the fastest 20-80kph and 40-100kph times – an indicator of the performance you can expect when either gets into its stride.

All the cars here have reasonably light clutches and slick gearshifts. The City and the Verna use six-speed manuals while the Vento and Rapid come with five ratios. That extra cog in the City, its light state of tune and its featherweight 1,165kg are what help it return the best fuel efficiency figures – we got 14.2kpl in the city and 19.5kpl on the highway. Compare that to the next best figures that the Verna posts and you’ll see Honda wasn’t kidding about its claims of the City being the most fuel-efficient car in its class.

But while Honda achieved what it set out to do on efficiency and driveability parameters, it’s been less successful on the noise front. The City’s engine is easily the noisiest of the lot and sadly, it never quiets down. The Rapid and the Vento are quite audible as well, but at least they settle down to a muted hum at cruising speeds. It’s the Verna’s engine that is the smoothest and quietest of this lot, and by a fair margin at that.

Hyundai has tweaked the suspension settings on the 2014 Verna and this has cured the old car’s nervousness at speed, its floatiness and its tendency to bottom out. The steering now also has more weight and the low-speed ride remains quite good. However, the suspension does still run out of travel over sharper bumps; this results in a painful thunk as the dampers compress fully and hit the bump stops. And at speed, though it is much improved, the Verna
still doesn’t like sudden avoidance manoeuvres, the rear feeling soggy when you make sudden inputs to the steering.

No such problems with the Vento or the Rapid. Both are incredibly stable at speed, have plenty of grip and are very closely matched in terms of handling. However, the Rapid is slightly better at low speeds and the ride is marginally flatter at high speeds as well. Both cars take bumps well though. Show the Honda the same potholes that you drove through in the others and the City flattens them well the faster you go. The City is also impressively stable at speed and the tyres, despite their relatively skinny size, grip quite well. What we didn’t like was the numb steering that, though weightier than before, doesn’t inspire the same confidence as the steering racks of the Vento or the Rapid. It is better than the Verna’s though. The City also lets in quite a bit of road noise over coarse surfaces and it doesn’t feel as well insulated from the outside as the Europeans.

Still, around town, if you ignore the slightly high dashboard cowl, the City is the most relaxing to drive thanks to the light steering, responsive engine and nimble dimensions.

The Verna is better than it ever was. Hyundai has not messed with its strengths – the looks, the equipment, the refinement. And it has marginally improved on its weaknesses. Handling is now sharper and more confidence-inspiring, and the car bottoms out less. What lets it down then is the rear seat, which isn’t quite as comfortable as the others, the throttle lag which makes it less easy to drive in traffic and the fact that the ride and handling still need a bit more polishing.

The Rapid and the Vento come across as solid, no-nonsense cars. What characterises them is their solid build quality, superb highway manners and strong engines. However, we think they both lack a bit of flash and, despite the attractive pricing, both lack essential bits of equipment too.

The City comes across as the best all-rounder. Sure, the noisy engine is a serious issue that Honda needs to set right, but on every other count, it is the better car. It’s good on equipment, fantastic on comfort and space, practical, easy to drive and strong on value. As its predecessors have done in the past, this new City goes straight to the top.