Mercedes-Benz, now in India for 25 years, is in the process of evolving from a maker of luxury sedans to one that also majors in electric cars. Question is, does the new EQC have enough Merc DNA in it? We play referee. 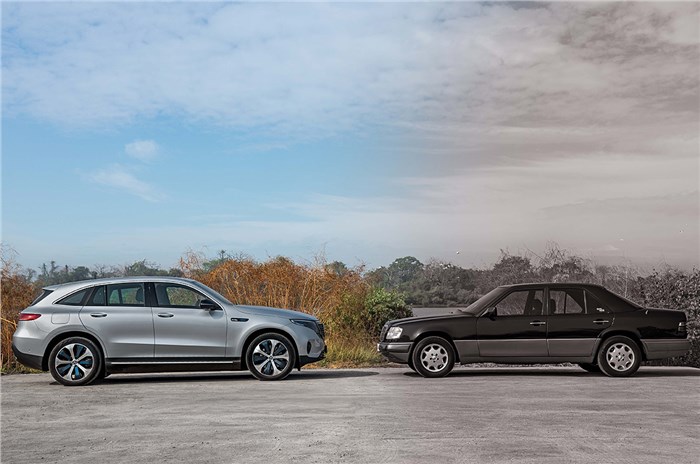 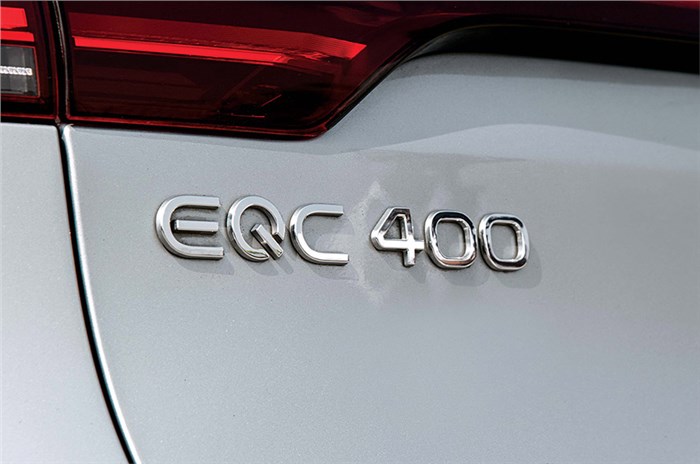 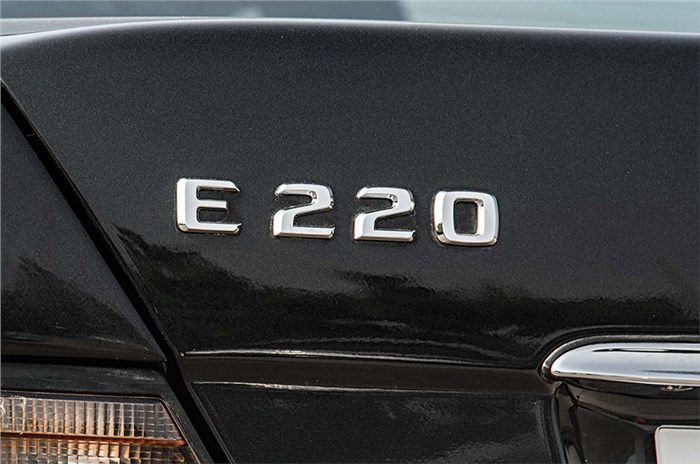 The W124 facelift ushered in the E-class nomenclature as we know it today.

Tired of hearing the words COVID and test in the same sentence? We have something different for you . . . .a DNA test.

Ladies and gentlemen, say hello to the Mercedes EQC, the German luxury car maker’s first pure-electric car. Now, this clearly is an electric car and, even at first glance, a Merc too. But just how much Merc DNA is there under the futuristic skin? And is it recognisable as a real Mercedes-Benz from both, inside the cabin and behind the wheel?

Luckily, we have just the car to keep the EQC honest. L S Ravi’s mint 1996 E220. The car is in such good condition, everything works and looks exactly as it is meant to. Take a quick drive and it feels like it has just rolled out of the Mercedes-Benz dealership. This is partly due to the fact that this E220 has done just 23,500km since it was made back in 1996, and it still feels tight, new and sparingly used. 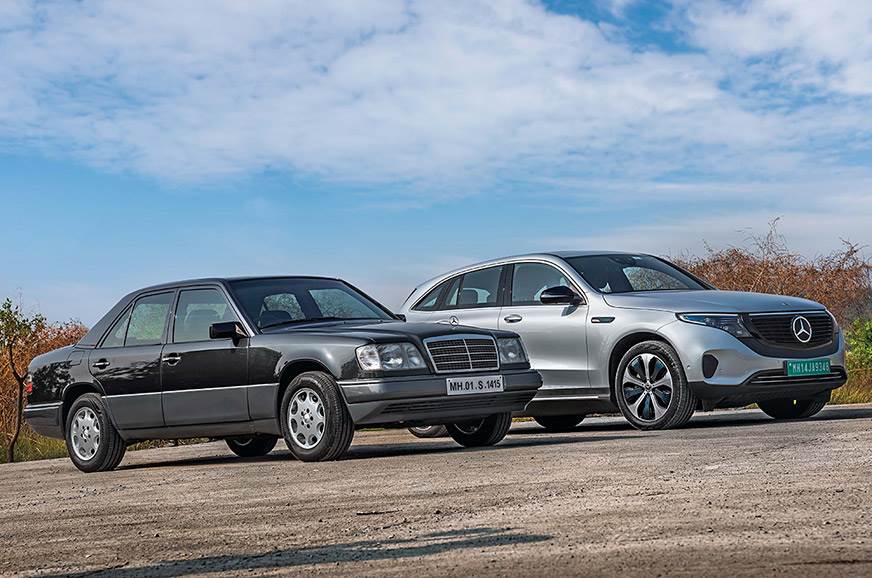 The W124 also isn’t just any old Mercedes. It’s special for a couple of reasons. For one, it is the car that started the Mercedes journey in India. And then there’s the fact that it’s often considered to be the last of the Mercs built without the influence of cost-cutting and cost accountants on quality levels. Before we really get going from one to the other, however, let’s go back …. way back.

The year is 1995. While the world has moved on to a new-gen E-class, Mercedes decides to start its India innings with the previous-gen W124. Yes, the W124 will go down in the annals of automotive history as an iconic Merc, but the late introduction of the car into the Indian market doesn’t exactly go down well with Indian luxury customers.

Sure, the W124, priced at Rs 22.5 lakh for the E220 petrol (Rs 23.45 lakh for the E250 diesel) is a lot of car for the money, and it also offers a quantum leap in ability over anything else in the market at the time. Most Indian buyers, fed on a diet of ancient cars, however, hold back; they only want the “latest”, and “new”. And who can blame them.

This is not a mistake Mercedes made ever again in India. Far from it, Merc is so quick on the draw in most cases, it lays claim to the luxury car market in India. Want to know who has the widest model range in India; simple it’s either Mercedes or Maruti. Check for yourself.

Mercedes is also the first to bring its luxury electric SUV to the market. Based on the GLC SUV, the EQC is the German automaker’s first EV offering. Question is, just how much traditional Mercedes-Benz DNA is submerged under the modern skin?

Let’s get started. First up, a refresher course in the W124. Turn the old-fashioned key in the door lock and pull on those chunky handles and what greets you is a heavy – near vault-like – door. I’m sure you’ve heard of how over-engineered German cars of the 90s were; they weren’t kidding. The doors shut with a resounding thud and then the instant you shut the world outside, you are overtaken by an overwhelming sensation of being capsuled in something solid. 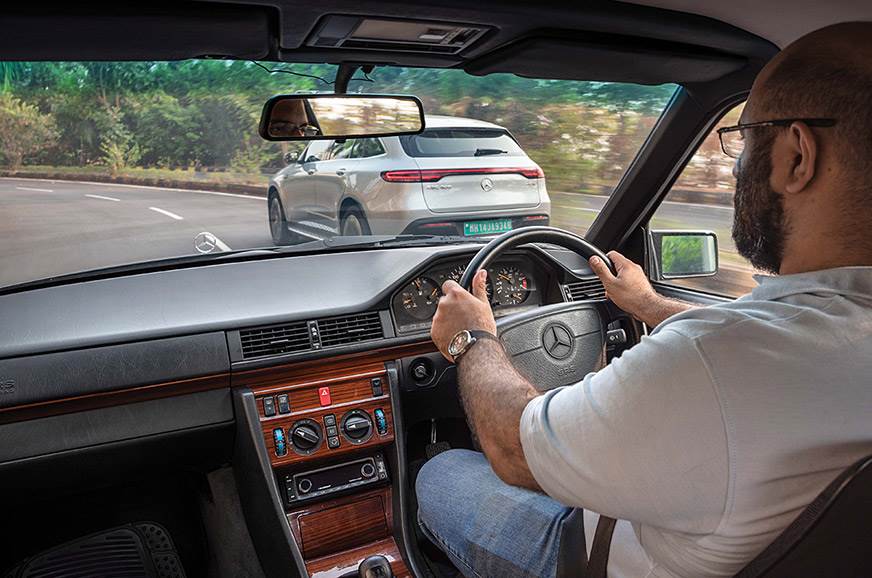 Then there’s that feeling of refinement. Unless you have your foot flat to the floor, the loudest noise you hear is the blower, depending on how far around you’ve set the fan controls. What you also experience when behind the wheel is a sense of time travel; and the memories come flooding back, thick and fast. I even subconsciously start humming music from the era.

ZAP TO THE FUTURE

Back to the present and the EQC takes refinement to an all-new level. Open the doors up and although they do not feel as figuratively vault-like as on the W124, they aren’t too far off either. Being an electric vehicle, the sense of refinement is several notches higher. In fact, this could very well be the most refined Mercedes-Benz ever! No noise and vibration filters in. And even wind, road and tyre noises are muted, proof that the engineers at Merc still can isolate and insulate better than anyone around. 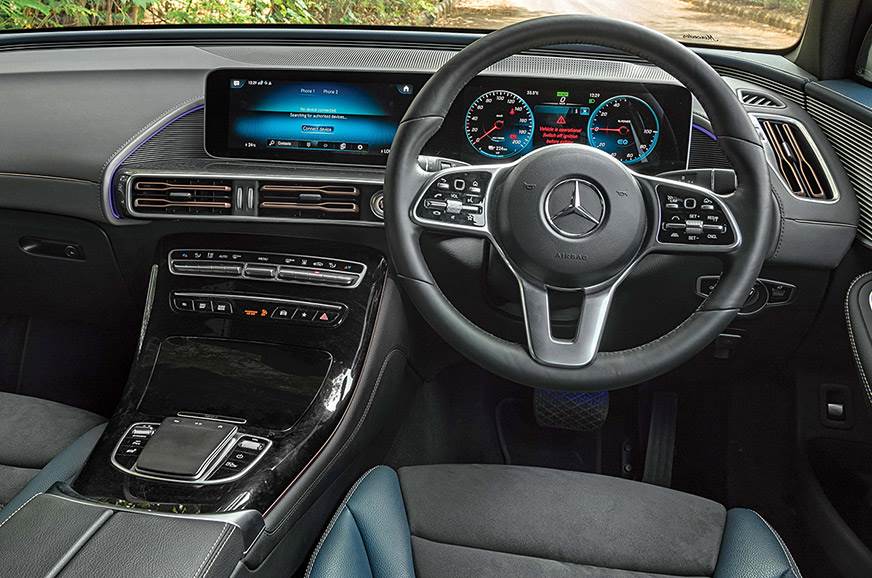 Lots more colour and bling here, but the solid build and high quality shines through.

Next, let’s move to comfort. Now, this is where these two cars handle things differently but arrive at the same objective. The EQC, with its slightly ‘stiffer’ and more supportive seats, is clearly the one that feels less plush. That doesn’t mean the EQC is any less comfortable. While the seats might not let you sink into them, or allow you to wallow in comfort, like they do on the W124, what you do get is infinitely more support. The contours, lateral support and shoulder support are superbly configured.

Thing is, for its time, the seats on the W124 were considered harder or stiffer than other similar cars. And then there’s the fact that this W124 had softer cloth seats. In fact, all W124s sold in India came with a cloth interior as standard. Leather – either grey or black – was an optional extra. And on the topic of extras, the other extra, believe it or not, were the alloy wheels! 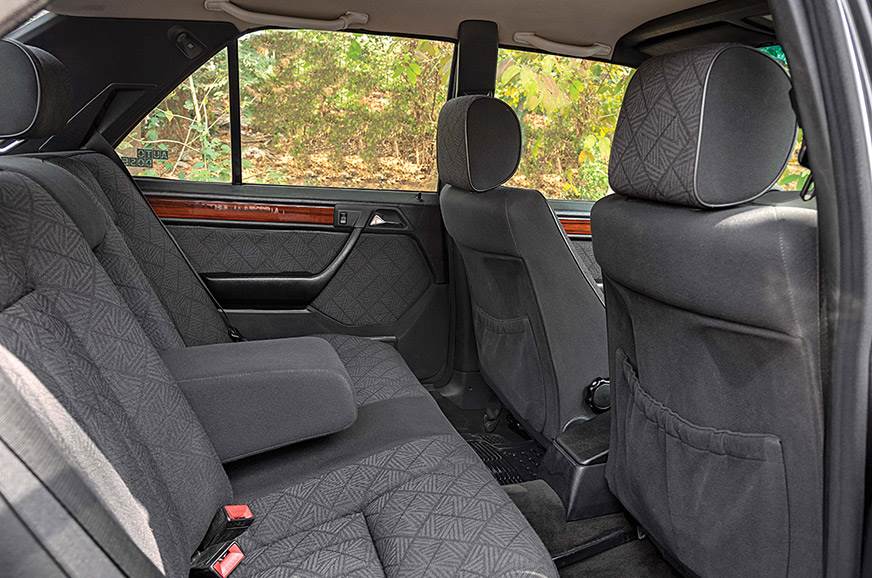 Cushioning on the W124 is softer and with the more supple ride, overall comfort is massive.

The tough build on the inside of the EQC is not as overt and in your face. While there clearly is more flash, bling, and iridescent neon (shock, horror) on the inside, look closer and you can’t miss the solid structure of the dash. The central console feels robust enough to stand on, although we wouldn’t recommend it, you can thump the top of the vents without the dash feeling worse for wear, and then even the door pads with their ribs feel solid.

AND FLIP BACK AGAIN

The W124 is legend when it comes to build. Even more robustly put together than the EQC, and squeak- and rattle-free even in its dotage, it feels like the dash is hewn from a solid trunk. And then there are the buttons and dials that, when used, give the impression they are made of polished stone. Clearly, one of the most vivid and memorable tactile sensations around; one you file away. 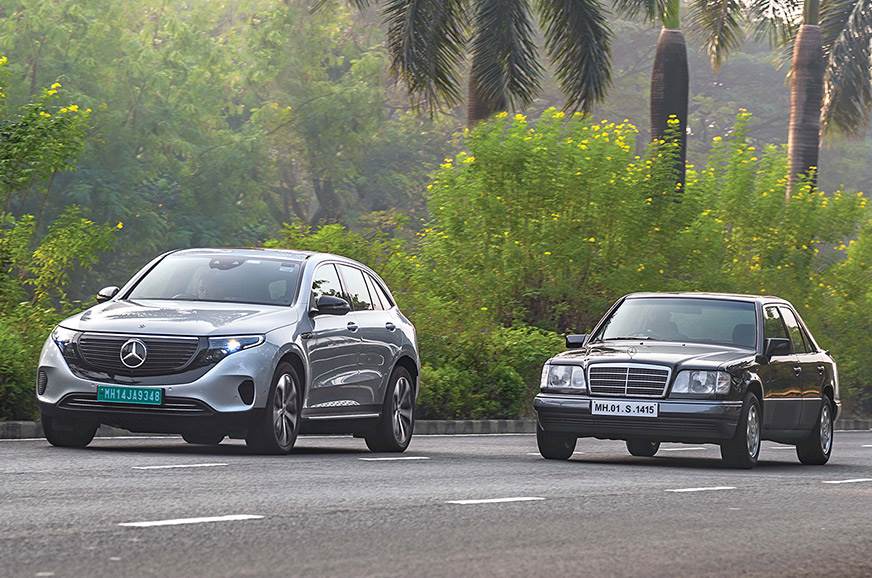 No shortage of road presence when the EQC 400 and the E220 roll down the streets.

When it comes to ride quality, as expected, it is the W124 that rides in a more plush manner. Part of this is down to the fact that the car runs a set of 15-inch wheels and the big sidewalls absorb a fair amount of the impacts. The ride is as supple as your yoga instructor, there are no sharp intrusions, even over bad patches, and then what really gets you is that the W124 doesn’t toss you around either. In the 90s, Mercedes had no real intention of making their cars corner hard or fast. All their target audience wanted was a comfortable car that gave them a plush ride and this approach really shows through. 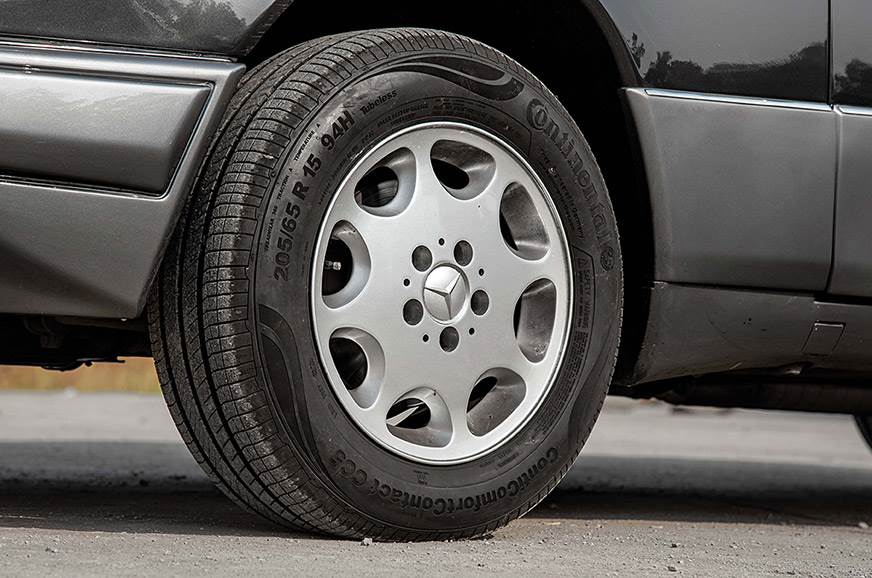 Puny 15-inch wheels mean the E220 can run on tyres with a larger sidewall.

On its ice-cool 20-inch wheels, the EQC can’t come close when you look at isolation or serenity. But that supple Merc setup and more approach to ride quality; it’s evident. Even now, ride quality clearly is the major dynamic objective, with grip and handling not as much of a priority. The ride is still an area of huge focus. 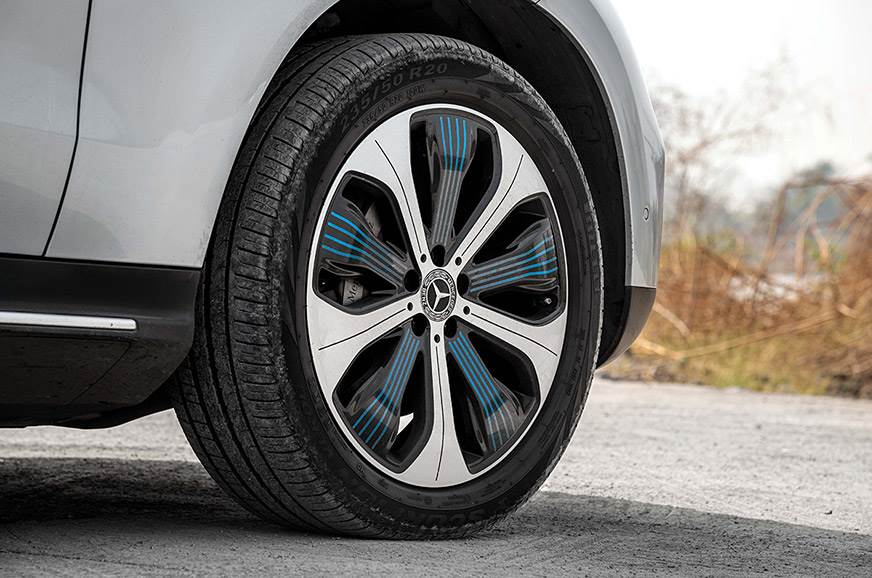 The EQC rides on 20-inch wheels with cool blue accents.

And so, we come to the last one – road presence. Now, while the EQC is based on the GLC, put the two next to each other and there is no contest when it comes to the way the EV looks. Not only are the massive front grille and techy headlamps impressive as standalone design bits, they also go a long way into giving it a distinct identity. While the W124 can’t possibly compare in terms of road presence, its confident square shoulders and strong lines give it immense strength and longevity. There is just something about the regal air of an older big Benz. 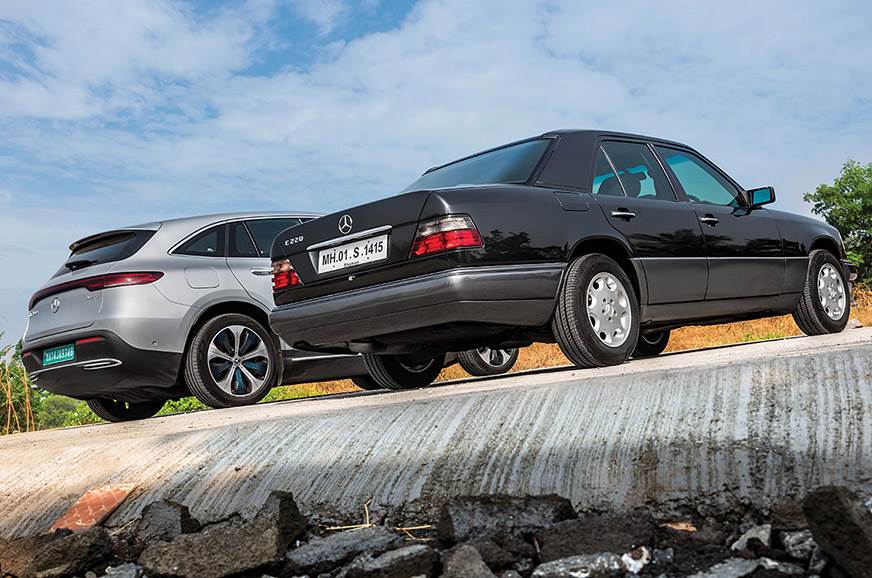 While the EQC is an SUV, the low-set battery pack does affect its ground clearance.

So, to answer our original question, does the EQC have enough Mercedes-Benz DNA in it? The answer is a resounding yes. Not only does it have some absolute cutting-edge tech that supports that slick design, it also has all the must-have Merc traits. The focus on refinement, the comfort-oriented suspension setup, the solid interiors, and the plush seats – it clearly is, even without the star, recognisable as a Mercedes. And that, in this day and age of fast changing tech, both inside and under the hood, is a massive achievement.

BEGINNINGS OF THE STAR IN INDIA

Historical data tells us that the first automobile to ever make it to Indian shores was in fact, a Benz Viktoria in the year 1897.

Incidentally, the car was originally ordered to Delhi and has since been lost to history. While Mercedes did have dealerships and distributors in India as early as the 1920s, the automaker only officially came to India in 1994 in partnership with what was then Telco and today is Tata Motors.

Road Trip In A Mercedes EQC