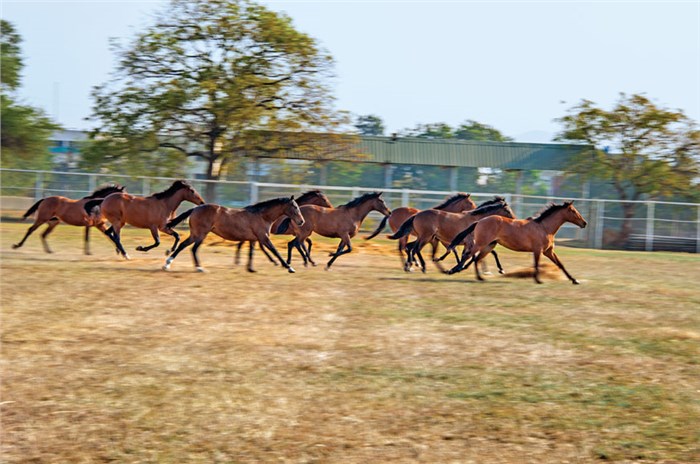 The thoroughbred, too, has been selectively bred over hundreds of years for one thing only – speed

That’s the expression when you feel 552 horses under your feet.

In today’s modern world, the role of the horse is far less pervasive, but their connect with us continues in the world of automobiles.

Can you count the number of times the word ‘horsepower’ or ‘hp’ is used in this magazine? This is a word that is so much a part of our lives, especially when you live in the world of cars, that we don’t even think about it anymore. If I asked you what horsepower is, most of you would guess along the lines of ‘the power of a horse’. So let’s begin the story here.

The physics of horsepower
Horsepower is a unit of measurement for power, which is the rate at which work is done. If you imagine ‘work’ as pushing a weight up a hill, then ‘power’ is how fast you do it.

The term was originally coined by Scottish engineer James Watt. Yes, the same person who is credited with making the steam engine an industrial practicality, and the man we should remember when we talk about 60-watt light bulbs.

The reason Watt came up with the term horsepower was to help sell his steam engines. He needed a way of rating their capabilities. Engines were replacing horses, the usual source of industrial power of the day and it naturally made sense to base his unit on horses.

So, this is what Watt came up with: one horse can do 33,000 foot-pounds of work every minute and that is one horsepower. Remember, it was the British Imperial system that was in popular usage then. So, imagine a horse raising coal out of a coal mine. A horse exerting one horsepower can raise 330 pounds (149.68kg) of coal 100 feet (30.48m) in a minute is one horsepower.

This is a very simplistic explanation of horsepower, but this story is not about the physics of power but the poetry of power.

The physics of Audi RS7
And the car we are driving today exemplifies this fusion of science and soul, the 552hp Audi RS7. Our destination is Pune, where are going to encounter some real horse power. Yes, a stable of thoroughbred horses at the Poonawalla Stud Farm.

Bred for racing, thoroughbred horses conjure up images of a world sheathed in wealth and prestige. Whether it’s the Queen of England at the Royal Ascot or Mumbai’s aristocracy at the Derby at Mahalaxmi, they all come to celebrate this incredible performance machine we call the thoroughbred. Rather than the raucous celebration of 20-20 cricket, this is a world of punctilious ceremony. And that’s where the Audi RS7 fits right in. It doesn’t have that parvenu boorishness and in-your-face character of an outright supercar, but rather the understated sophistication of gentility. This is a car that will take your family along with your Louis Vuitton bags to your weekend home, swathed in luxury and comfort. But don’t let that fool you; under its bonnet are eight cylinders in a V configuration, with a total displacement of 4,000cc where fuel and air combust to release the 552 horses and rocket this nearly two-tonne car to 100kph from a standstill in just 3.9sec! This car will hit a top speed of 250kph before the limiter kicks in. That is supercar performance.

You can really appreciate the sheer power of the horses when a dozen of them surround you wondering who these infiltrators are that have intruded into their paddock? And what is that big blue thing? Is it edible? No it isn’t, it’s an Audi RS7! A few nibbles on that very expensive paintwork answers that question for the horses, but not to the accounts department. ‘An act of God’ may be covered by insurance, but not ‘nibbled at by horses’.

Where the powers meet
The thoroughbred and the RS7 have more in common than you think. They are the result of years of evolution. The RS7 can trace its performance DNA back to the start of the 20th century and Audi’s involvement with motorsports. From World Rally Championships to Le Mans to Touring car championships, Audi has been shaped and engineered on the track. The thoroughbred, on the other hand, too has been selectively bred over hundreds of years for one thing, and one thing only, speed. As a result of years of selective breeding, these are elite athletes that can run at over 60kph. This is an animal bigger than a common cow that weighs between 500 and 600kg. Just what is under that bonnet that powers this animal?

The basic philosophy of how a car engine works compared to any living creature is the same. You need fuel and oxygen to power either the motor or the muscles, which is converted into heat and motion.

If you looked under the bonnet of the horse, you would find a heart the size of a football. The horse has a proportionately larger heart as compared to other mammals its size. A bigger heart means more blood can be pumped around the body. At rest, the horse’s heart beats at about 25 beats a minute. At full gallop, it can go as high as 240 beats per minute, pumping out one litre of blood. Well, as we know, a heavy foot on the gas pedal has consequences on consumption.

The other piece of engineering that makes the heart such a superb performance machine is to be found inside its huge chest cavity, ensconced within its 18 ribs (humans have 12). It hosts an enormous pair of lungs extending from its chest to the hip bone, with a capacity of roughly 55 litres. At full gallop, they fill their enormous lungs 140 times a minute. Can you imagine the amount of oxygen they are burning every minute? This gives them the ability to deliver enormous amounts of oxygen to their muscles.

What’s really crazy is that a horse has a sort of a turbo system that allows the oxygen-carrying red blood cells that are stored in its spleen to be released on demand. This means that the horse can call upon reserve blood cells to provide extra oxygen to its muscles.

Muscles cannot transform energy into the movement with 100 percent efficiency, much the same way as a car engine is not totally efficient. As a result, some of the energy is lost in the form of heat. The blood picks up the heat being produced in the muscles and takes it to the skin, where it can be dissipated. Horses get rid of excess heat by sweating. They sweat more than any other animal and may lose as much as 10-15 litres of sweat an hour in hot or hot humid conditions. Remember drivers in an F1 race?

Like most performance cars, the horse too is rear-wheel drive; 25kg of muscles on each of the legs drives this elite athlete. But it’s not to say that the front wheels (legs) don’t contribute. When it flexes its bicep muscles, it stores the energy in its elasticity and then releases it to catapult forward. Think of it as Audi’s Quattro system.

Whether it’s the thoroughbred or the RS7, what really matters is that every single part works to its peak efficiency. And that’s what differentiates a thoroughbred from a common commuter.

Horse power or horsepower?
After a long day with the horses, it’s time to point the RS7 back towards Mumbai. While I am happy and in complete awe of these amazing animals, I am glad that the horse has evolved into a car. Imagine trying to use your own knees as the suspension like the jockeys who ride these horses do. Or not having airbags when things go wrong. Or air conditioning.

Here’s something to think about – if it was not for the horse, we might not have a car today. If you look back at the journey of man from barbarism to an advanced civilisation capable of engineering this automobile, you will find the tracks of horses right beside our own.

Today, there is a roadster that is making its way to outer space. If and when some alien civilisation encounters this, will they think
that the DNA of our cars came from the electric eel?

Horsepower vs Manpower
How much horsepower does a horse really generate? According to Google, about 15hp. But what about man? In 2009, the Jamaican sprinter Usain Bolt produced a maximum of 3.5hp, 0.89sec into his 9.58sec 100-metre-dash world record.