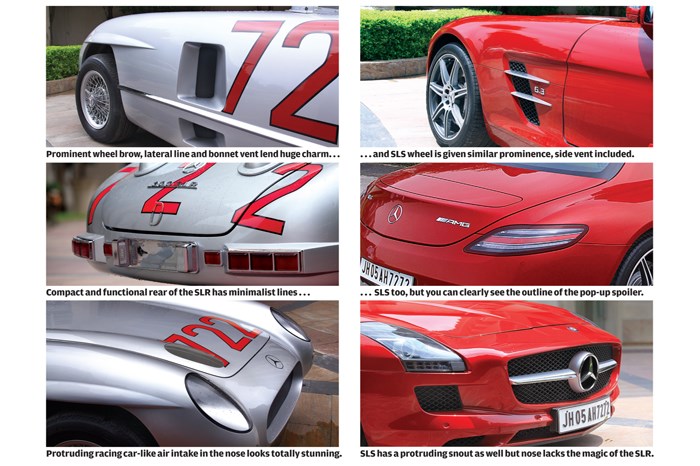 Is that Mercedes’ priceless 1955 Mille Miglia-winning 300 SLR roadster being driven on Delhi roads? Can it really be the one?

Has it never happened to you? You like the shape of a car so much, you keep going back to that page in the magazine or that website to take a look at it again, and again, and again. And this silver car or, more correctly, Silver Arrow replica you see on this page is the result of one such obsession. It is built by Bonito Chhabria, son of renowned Indian cardesigner Dilip Chhabria, to satiate his obsession for the 1955 300 SLR, this is one magnificent obsession.
“Why did you make it?” I asked an obviously besotted Bonnie, who incidentally changes his supercars faster than most of us change our er . . . phones. “It all started with my SLS,” he confessed. “I loved the lines of the car even before got my hands on it, but then once I began to use and drive it on a regular basis I got totally hooked to its spot-on proportions and very original lines. It’s very, very different from anything else around, and so I started to do some research on the origin of these lines.”
That, of course, led him to the 300 SLR, via the W198 and W194. Why, because while the latter may have many similar elements carried over to the SLS, none have the 300 SLR’s proportions. “I can stare at the rear of the car for days,” he says in all seriousness, and he just loves the way the car sits on the road. Add the attractiveness of the long bonnet, which incidentally is due to its very unusual engine configuration, and you have proportions made in heaven. And can we forget the functional detailing of the attractive Grand Prix car-like intake snout, side-exiting stub exhausts and the comet tails behind the driver’s and passenger’s heads?
What people often get confused about are the origins of this car. A common misconception is that this car has a lot in common with the gullwing-door-equipped 300 SL. But a 300 SLR like this 722 is actually a very different beast and, truth be told, much more of a thoroughbred. Under the hood is no production six-cylinder motor, but an in-line eight engine taken from the W196 grand prix car. Of course, this gave the otherwise lightweight tubular chassis- equipped car insane performance. Power was in excess of 300bhp, the light weight magnesium body meant it had very little mass to push and when geared for high speed, 300kph was easily attainable. No wonder the bonnet had all those ducts and the stub exhaust popped out fromthe side of the car. This motor really needed to breathe. And the car became famous after driver Stirling Moss and navigator Denis Jenkinson beat the Mille Miglia record in 1955 with a time of 10 hours, seven minutes and 48 seconds. That’s 1,609km or the equivalent of Mumbai-Delhi on public roads, through villages without the benefit of modern highways, at an average speed of almost 160kph. Insane.
For all those of you wondering, yes there was an ultra-rare coupé version of this car with gullwing roof hinged doors, the latter needed because of the tubular chassis. A nest of steel tubes ran along where the door would have normally been placed and so Mercedes had no option but to make an upward-opening hatch. The car was called the Uhlenhaut coupé, after Mercedes’ famous Anglo-German chief engineer, and though only a handful of cars were made, it became an icon.
That is why you see a lot of similarity between these two cars, the modern-day SLS and the 1955 SLR replica. Theyboth have the long hood, the ducts inthe side, the compact and stubby rear, and the tucked-in, compact cabin. This replica was actually built after digitisinga very expensive 1:12 scale model of the car, the data then correlated with blueprints of the design.
Of course, look at the car closely and you realise that it’s not as good a copy as you first thought it was. The wheels are a bit small, the windscreen is a bit large, and there are a few other blemishes as well. But these will be fixed in future. And this car is a Mercedes too – it’s been built on the remains of an old E-class, Merc’s popular W124.
What’s 722 you ask? Well, that’s easy; it’s the time at which Moss took off from the start line of the Mille Miglia in Brescia, the numbering system also helping spectators along the route check how quick someone was really going. What a car, what a legend. If you do visit Germany, make sure you visit the Mercedes-Benz museum in Stuttgart where the original 300 SLR 722 is housed. If ever it is put up for sale, this car has the potential to become one of the most expensive cars in the world. Puts it firmly out of reach of mostly everyone, doesn’t it?
GENESIS- FROM SLR TO GULLWING COUPE
The 300 SLR was the brainchild of Merc engineer Rudolf Uhlenhaut. The story goes that he liked the race car so much that he wanted one with a roof (seen in the background). Unfortunately, like many space-frame cars of the time, a nest of tubular chassis members ran along the sill. This, of course, meant that the only type of door possible was something akin to a hatch, hinged on the roof. The compact cabin and wider waist then gave the coupé the wing-like profile to the door.