Why Volvo India will be all-electric before 2030

Volvo India plans to have 80 percent sales come from all-electric vehicles by 2025, and it aims become an all-EV company even before its global target of 2030. 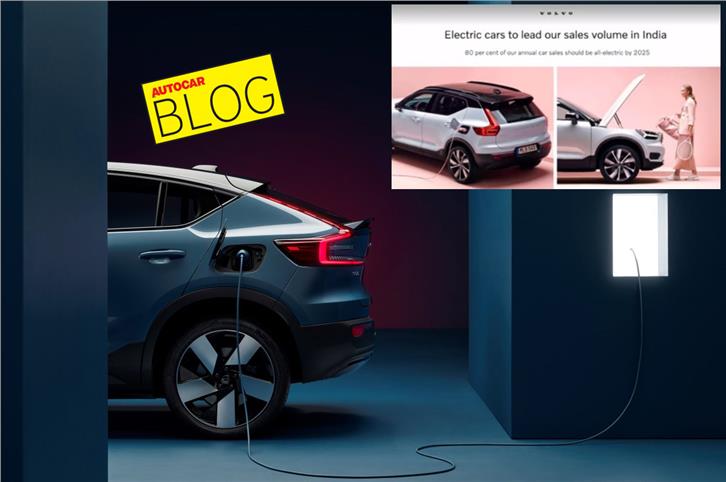 Volvo India announced today that it will launch one new electric car every year, and by 2025, it aims to have 80 percent of its annual sales come from all-electric vehicles. Furthermore, it intends to go all-electric even before its global targeted date of 2030. Speaking at the unveil of the XC40 Recharge EV in Delhi, Jyoti Malhotra, Managing Director, Volvo Car India, said, “Globally, Volvo will be a fully electric car company by 2030, but we want the transition in India to be faster”.

On the face of it, this seems like an odd plan, while countries like the UK have in place a ban on IC engine cars from 2030, India is aspiring to have about 30 percent EVs by 2030. Moreover, the country is still developing a nationwide uninterrupted energy supply system, as well as adequate charging infrastructure. So why rush EVs in India?

The answer lies in sales, or rather the relative lack of it. Volvo is very much a niche player in the Indian market –in 2019, the Swedish firm sold 2,253 units, while in 2018, it hit its highest ever figure, at 2,638 units. Compare that to segment leader Mercedes, who sold 13,786 and 15,538 units during the same period, and Volvo’s sales volumes are indeed quite small; its figures are even lower than JLR, who clocked 5,000 and 4,596 units, respectively.

Thus, rather than fight the bigger luxury players for market share, Volvo India is trying to shift the goal post and instead target the niche luxury buyer. What’s interesting is that the company is confident that in doing so it will still continue to grow. That sounds ambitious, but with annual volumes just above the 2K mark, growth with EVs alone could be possible.

Furthermore, Volvo India has only about two dozen dealers that are limited to bigger cities, thus electricity supply and charging infrastructure will not pose too great a challenge for its customers. Bolstering this thought is the fact that data from early EV adopters shows most consumers rarely rely on public chargers and instead use their own home chargers. EVs are also primarily additional cars and with high-end customers, a multi-car garage will be the norm.

So, with fewer charging concerns, a low volume base and a small dealer spread, Volvo India has little to lose and an easy base upon which to grow with its early EV plan. However, interim growth could be a challenge; the company has stated that it intends to double its growth in the next two years, but the IC engine line-up could face some headwinds, with consumers not likely to warm up to a car and technology that’s soon to be discontinued.

In any case, the company is clearly betting on the future, and in getting to EVs sooner, Volvo would have a nice early mover advantage once the country does go all-electric. That really is the crux behind the company’s business plan – quite evident in its name ‘ReadytoRecharge’.