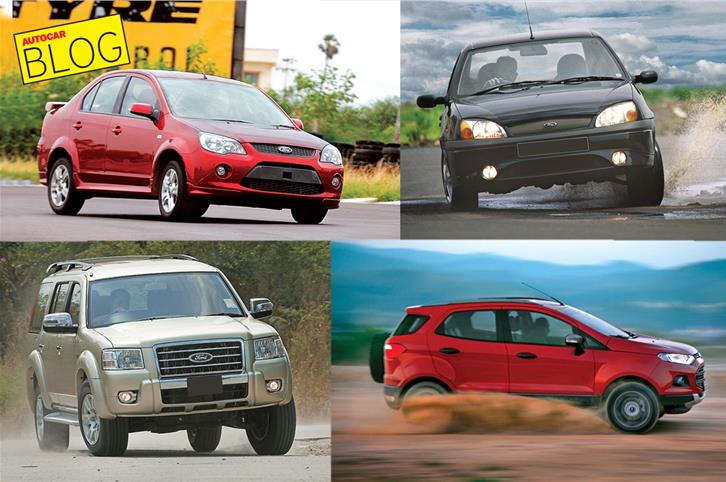 With Ford India's history of some great driving cars, Shapur talks about how new SUVs could have revitalised the brand in India

I wasn’t impressed by Ford’s first car in India, the Escort. To begin with, it was oddly shaped. It had a rounded nose and a rectangular rear. And then, while it drove well, the wheezy pushrod 1.3 engine could barely run the air con. It drove like it was dragging anchor. Ford and GM at the time only gave their cars single-point fuel injection. Daewoo, on the other hand, went straight to multipoint fuel injection or one injector per cylinder. The Koreans understood us so much better, even then. The uprated Ztec from Ford promised much with its twin-cam setup, and it was better, but it too ultimately disappointed as the tune was way too conservative.

Then came the Ikon, remember that, with its killer 1.6 Rocam engine and its ‘to die for’ steering. That was ’99, and after that followed a string of some truly great cars. The Fiesta was epic, the Fiesta S still remains the best driving affordable car to go on sale here, ever, and then came the Figo, another driver’s delight. Speaks volumes about how well the chassis and various other systems were built. And this goes for today’s Figo as well; also easily the best car to drive in its class.

Ford, over the years, however, hasn’t had enough bestsellers. This is the bitter truth. It hasn’t understood the Indian customer as well as others have. The Koreans and MG especially, both of whom have quickly figured out that if you deliver size, space, value and plenty of features, you are well on your way.

What’s unfortunate is that Ford looked set for a long innings before the Coronavirus set in. Set to launch a string of SUVs with then partner Mahindra, you could have put good money on its numbers steadily improving. Ford, you see, know SUVs. One of the largest makers of SUVs around, they make up a bulk of its business. And Ford has always done well with SUVs here too. The Endeavour was a bit of a slow starter, but now has cemented its place in our market, despite stiff competition from Toyota. And then there’s the EcoSport, the first compact SUV, which despite now being a bit long in the tooth still exerts a strong appeal. An all-new EcoSport would have done seriously well. Think something the size and spec of a Kia Sonet, but with Ford-like driving manners. And then there was Ford’s Creta and Hector rival. The halo effect of the Endeavour would have gone a long way in making this SUV very desirable, and then Ford could have brought in its special editions, real ones, like the Raptor, and sub-brands like the Bronco. Indian customers in general are now increasingly even appreciating cars that drive well. Even the timing was right.

While imports will continue in the short term, question is, will Ford fight back: like it did in Ford versus Ferrari? Or will it give up what is likely to be one of the largest car markets in the world: forever? After having finally understood it.