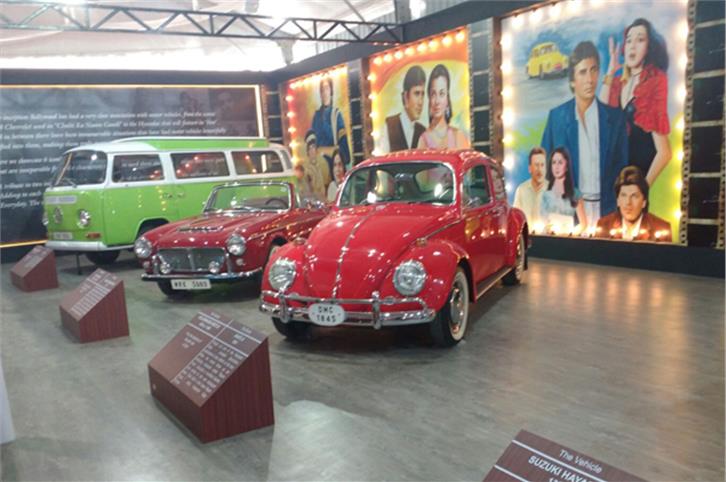 The Auto Expo in Delhi is not just a platform for manufacturers and consumers but it's India's biggest celebration of all things automotive. And cars, as much as they are an integral part of all our lives, have also played a huge role in our cultural and artistic evolution. Our films have had some iconic cars and bikes on screen over the years, and in keeping with the theme of celebrating automobiles, this year's show had a special section dedicated to showcasing some of the biggest 'automotive stars' of Bollywood over the years.

The first is a bright green VW van, the T2 Kombi. The particular model on display is a replica of the one used in the legendary Yash Chopra movie Deewar, the one in which Amitabh Bachchan first established himself as the ‘angry, young man’.

Also on display is a slick 1200cc 1965 Fiat Spyder that was used in the 1982 Rajesh Khanna hit Mere Jeevan Saathi. This very model was the one being driven by Rajesh Khanna while he was singing the famous song “Chala Jaata Hoon” just before meeting with a road accident that changes the course of his life, and consequently, the movie.

A red Beetle from the 1991 movie Akayla reminds onlookers about Amitabh Bachchan driving and singing as Inspector Vijay Verma.

Bollywood also loves motorcycles (just look at the success of the Dhoom trilogy). From the first, ground-breaking Dhoom film, we have the lethal Hayabusa ridden by the loved-by-the-ladies villain, John Abraham. Again a replica of the original one, the motorcycle is a throwback to one of the most adrenaline-pumping movies made by Bollywood in recent times.

The tiny 1972 Rajdoot GTS on stand was popularised by the 1973 romantic film Bobby. The adorable little motorcycle stole as many hearts as the chemistry between Rishi Kapoor and Dimple Kapadia.

But the most interesting vehicle on display is the 1954 350cc Ariel which was one of the protagonists in what is arguably the most iconic Bollywood movie of all times – Sholay.

If films and automobiles are your thing, make sure you find this little section at the 2016 Auto Expo.