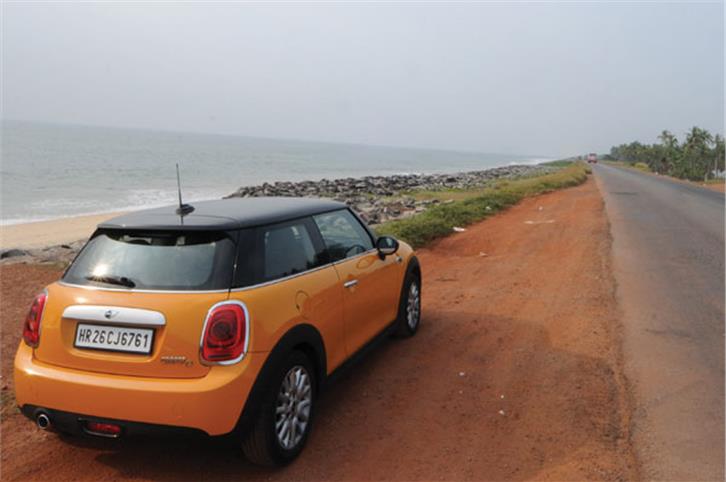 Hugging the coast involved some very good roads, and some very bad ones too. On the Mini Epic Drive.

It was already dark by the time we got to Goa, and there wasn't a chance to do much then. So, next morning, we took to the streets in the Mini, getting in as much of the local flavour as we could. We were at Betalbatim and took smaller lanes on the inside to move southwards. It was a typical Goan Sunday, with the locals headed to church in their Sunday best. We stopped at Colva beach for a bit of a breather before we got on the NH17 for the way to Mangalore.

After that, the next up was Karwar, from where the road starts to climb up. One amazing thing about the NH17 is that once past Karwar, the road sticks to the coast and continues like that all the way to Mangalore. The twisty sections were, again, very entertaining and fun in the Mini. While it put us all in a good mood, little did we know what lay ahead.

Past Gokarna, the road started deteriorating. The Mini was pushed to the brink yet again as we crawled over broken roads, clunking and thunking our way across. It did handle the poor surface capably, but it is, after all, a stiffly sprung performance hatchback, and this section took a bit of a toll on our backs.

Fortunately for us, our misery didn’t last for long. Further up, near Marwanthe, the sea, which had been close but not close enough to get a proper look at all this while, finally was right next to us. It was beautiful driving down a long straight with the sea on one side. We watched the sun go down there, accompanied by some refreshing coconut water.

After we left Marwanthe behind us, the sky started to get overcast. Soon enough, the sulky looking clouds gave way and it began to drizzle. The drizzle evolved into a downpour past Udupi and a new problem reared its head. We were running low on fuel. While there were some fuel stations on the way, we wanted to fill up once we got close to our destination (the chances of getting adulterated fuel is less at busy pumps closer to bigger cities). So we decided to put the Mini’s green mode to use. And it worked out pretty well for us, the range improving enough to carry us all the way to the city limits, where we tanked up.

Getting into Mangalore city was quite a task as the traffic was heavy and the rain had slowed proceedings down quite a bit. It took us nearly an hour and a half to cover what was simply a few kilometres. One of the most trying drives so far, we were all glad as we drew into the hotel parking lot.

We needed to get as much rest as possible since the day after would be the longest stretch - the drive from Mangalore to Kochi. Challenge accepted.