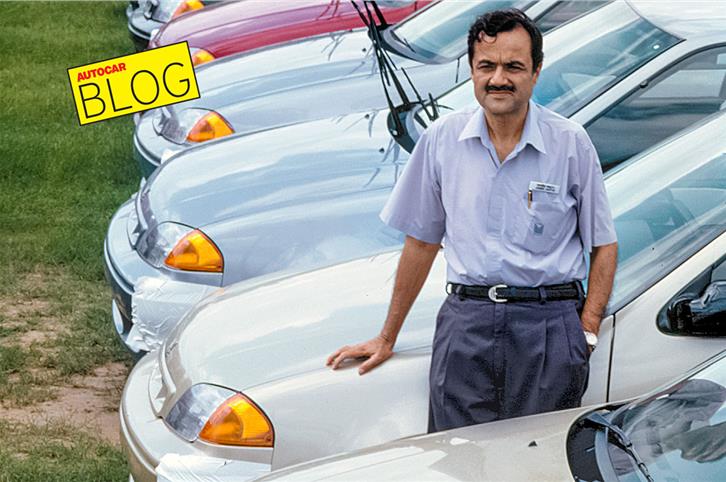 Jagdish Khattar in 1999 when he took over Maruti Udyog as managing director.

Decisive, visionary, and passionate, Jagdish Khattar transformed Maruti from a monopolistic monolith into an agile company in sync with the customer.

“I don’t know the ABC of cars. I leave that part to my Japanese friends at Suzuki!” quipped Jagdish Khattar at the launch of the first Swift in 2005. What should have been taken as a casual, off-the-cuff remark had a lasting impact on me, because what Khattar, then managing director of Maruti, meant was that you didn’t need to be a quintessential car guy to successfully run India’s largest car company.

Instead, Khattar was a through-and-through people’s guy, the right leader who came at the right time to lead a people’s car company. Khattar faced a trial by fire when he took over as managing director of Maruti Udyog in 1999. The company was at its most vulnerable and going through the toughest period in its history. The bitter fight between Suzuki and the Government of India (then Suzuki’s equal joint-venture partner) had been resolved in 1998, but the three-year impasse between the warring partners had resulted in a freeze on new products and capacity expansion. With no fresh products to fight aggressive Korean newcomers like Hyundai and Daewoo, Maruti faced serious competition for the first time.

Unlike his equally charismatic predecessor R C Bhargava, Khattar never had the luxury of enjoying the total monopoly Maruti once had (at its peak, Maruti’s market share was an astonishing 84 percent). In fact, in the early days of his watch, the company’s market share fell to an all-time low of 40 percent, the fallout of a strike in 2000 that crippled production for three months. But that didn’t deter Khattar.

The former IAS officer, who joined Maruti in 1993 (as marketing director), galvanised all stakeholders with his people’s touch. He held sway over unions and the bureaucracy, motivated his employees and dealer fraternity, and wooed investors during the company’s IPO, but, above everything, he never lost sight of what mattered the most – his customers.

In the launch issue of Autocar India (September 1999), which carried the first of his many interviews with us as managing director, Khattar said, “Whatever shape the market and policies take, our cars will always be affordable.” In the same interview (reproduced here), he understood the enormity of the challenge that lay ahead of him. 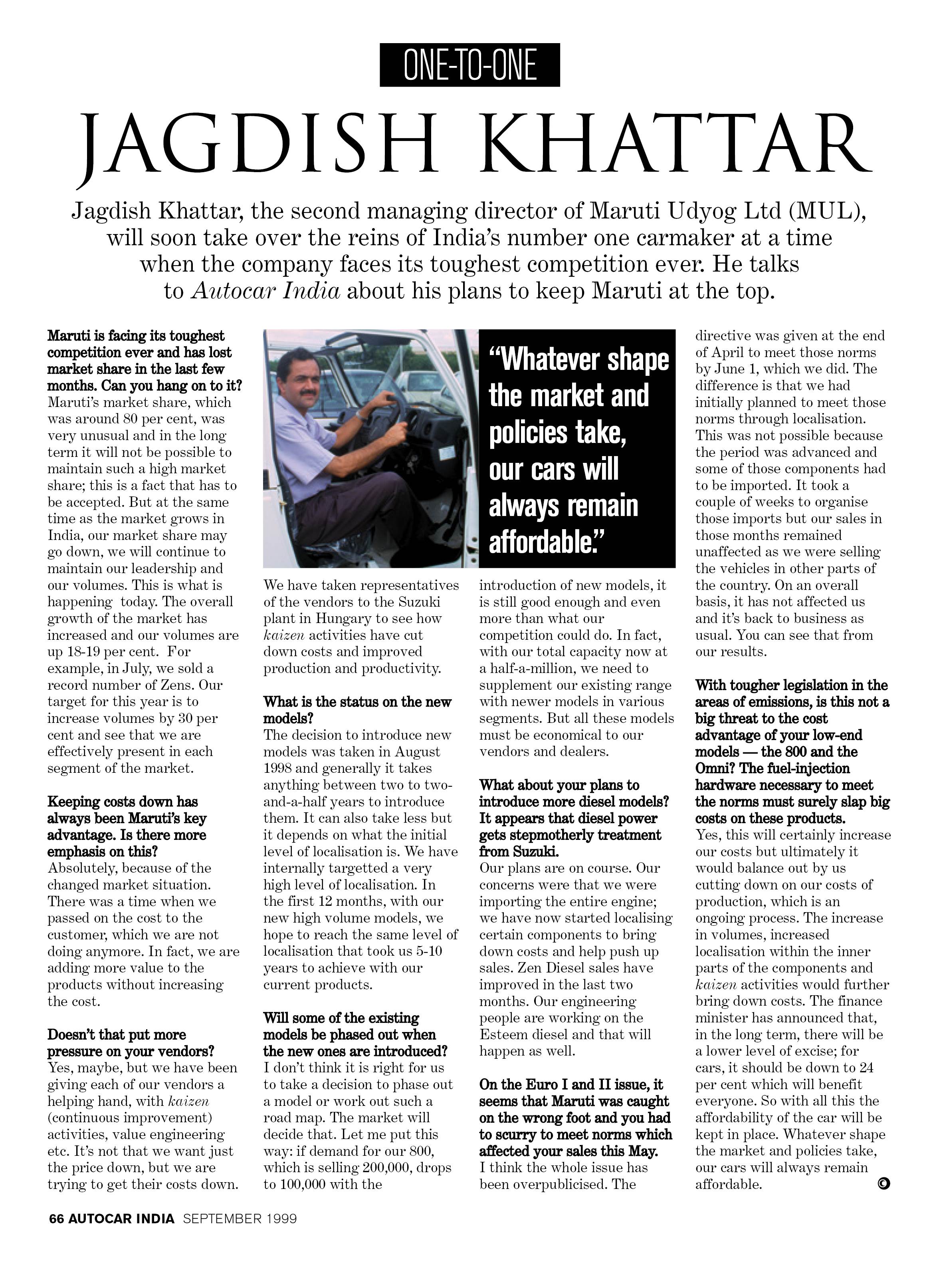 The first of our many interviews with Khattar was in the inaugural issue of Autocar India.

It’s fair to say that it was under Khattar’s watch that Maruti was transformed from a monopolistic monolith to a company with a new-found agility that was in complete sync with the customer. In fact, no automotive CEO knew his customer better than Khattar. He travelled to far-flung regions of the country to check the pulse of consumers. He even found buyers where none existed. He devised special schemes for NRIs to gift cars to their loved ones back home, and in tough times, even turned his attention to priests and the devout. His thinking was: “When times are bad, people turn to God; that’s when they go and donate to temples.”

He also saw the long-term value of the rural markets — a rich ground for first-time buyers. “You people living in big cities need to come to small towns to know what customers really want,” he would often tell me whenever I pressed him on his products not being sexy enough. Two decades on, customers have changed and want sexy products, but Maruti’s continued dominance of the sales charts indicates that trust is still the most important factor that sells.

And building trust with customers is what Khattar relentlessly pursued. His obsession in achieving the highest customer satisfaction scores with J D Power, his push to make service accessible and affordable in every corner of the country with a chain of Maruti Authorised Service Stations (M.A.S.S), shoring up residual values of his cars with a structured used car network and offering valued added services like insurance and accessories are some of the strategies he spearheaded to earn customer loyalty.

Khattar also knew that eventually it was the dealer that would be the interface between the Maruti brand and the customer, and made sure they were a happy lot. He once told me, “It’s important that dealers are profitable because a happy dealer means a happy customer.”

The Mumbai floods of 2005 is my favourite example of Khattar at his customer-focused best. The unprecedented deluge submerged thousands of cars and left owners marooned with the prospect of huge repair bills and cars stuck in workshops for months. Khattar wasted no time and swooped to the aid of his customers. Maruti pumped in around Rs 3-4 crore, which went into absorbing 50 percent of the repair costs and getting cars back on the road as quickly as possible. “In the face of such a natural calamity, I felt we had a moral obligation to share the pain of our customers,” Khattar told me. Contrast this with Honda owners who had to wait almost a year to get their cars back, because it took ages to get replacements for hundreds of ECUs damaged in the flood.

Anyone who knew or interacted with Mr. Khattar, or just Jagdish, which he asked me to call him when I first met him in 1993, will fondly speak of the dynamic person he was. He loved holding court, had strong views, and was a fountain of knowledge. His retirement from Maruti in 2007 was rather abrupt and, sadly, he became persona non-grata with the company, which ironically is eulogising him after his demise.

His fallout with the company he so successfully served was largely because he chose to cut all ties (rather than continue in some advisory role) and start his own venture which, at one level, would compete with Maruti. Carnation Auto, a multi-brand retail and service network, however, failed to take off. Khattar couldn’t work his people’s charm to persuade brands to support him.

It wasn’t people he was dealing with, but the powerful car industry, which viewed his venture as a threat and collectively lobbied against him, more so after he snitched to the Competition Commission of India on monopolistic after-sales practices of car makers.

But the world will remember Jagdish Khattar as possibly the best automotive CEO the country has seen. Decisive, visionary, and passionate, he had all the qualities of a great leader. His death at the age of 79 due to a cardiac arrest is a huge loss to the auto industry which, in no small measure, he helped build. I for one will miss our chats, his incisive knowledge of consumer behaviour, and that mischievous twinkle in his eye. RIP, my friend.