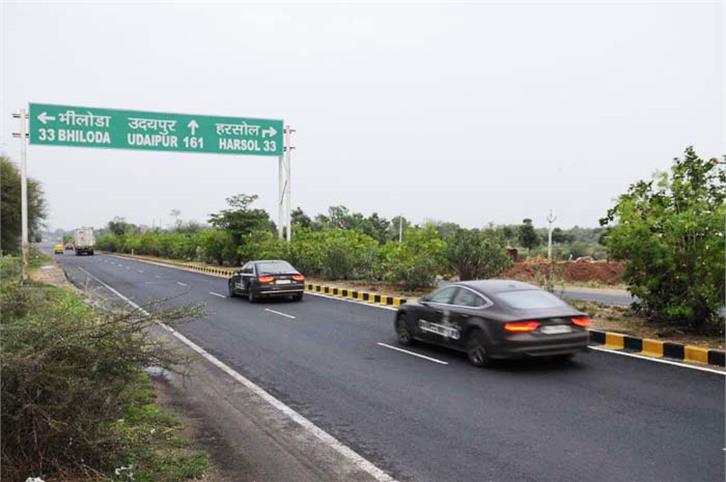 It’s another six-lane highway drive which would be completely uneventful if not for a herd of camels in the middle of the road.

We’re almost at the halfway point of our journey. Now when I say halfway mark, I don’t mean based on distance. Delhi is where we will be bidding adieu to the A7 and the A8 and switching to the Q5 and Q7 for the rest of the trip to the highest motorable road in Khardung La, Leh.

We set out from Udaipur in the wee hours of the morning. Another 660km to go till our next stop, the nation’s capital. We want to get there before it’s evening and Delhi’s dreaded traffic starts to go haywire. We’re still on the Golden Quadrilateral, so it’s six lanes all the way. The drive is so comfortable; I even manage to catch up on a few hours of sleep. The only downside to this smooth stretch is that the drive is quite uneventful. There aren’t any exciting twists and turns or even much traffic to navigate through. The only little bit of traffic we come across though, is not quite the kind we expected. There’s an entire herd of camels in front of us and the only way ahead is through them. Of course, we have to exercise extreme caution as sudden reaction on the part of even one of the animals would mean absolute mayhem for the entire herd. You can imagine what that would do to us, smack in the middle.  On the plus side, our photographer finds a rider who is willing to pose with the Audis, for a fee. The reason why we agree to reimburse him is that he doesn’t ask for money but instead, a cold drink in the middle of the scorching day.

After that, it’s smooth sailing all the way to Manesar, and that’s where the traffic hits us. Getting from Manesar to Gurgaon takes us a whole three hours owing to the sheer number of trucks on the road. Thankfully, by the time we get to Delhi, we’ve missed the rush hour traffic.

We head straight to the hotel and turn in for the night.

We’re bidding farewell to the Audi A7 and the A8. Although extremely capable vehicles, the treacherous mountain terrain would be too harsh for them. It’s time for the Q5 and Q7. We’re headed to the highest motorable road in the country. And we can’t wait.